HomeNewsWomen’s philanthropy in Minnesota gets another boost

This article from StarTribune.com 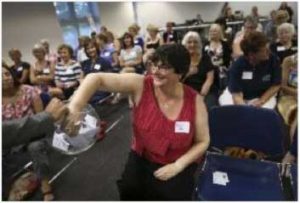 Kuehn was among about a half-dozen women, mainly from the Shoreview area, who launched the Power of 100 a year ago. They expected that 30 or 40 women would show up. But by the second meeting, 100 women poured in.

Pam Maccani, a Shoreview mother who came up with the idea, said she borrowed the model from similar philanthropies in such cities as Cleveland; Des Moines; Santa Fe, N.M.; and Grand Rapids, Mich.

Unlike many grant makers, The Power of 100 doesn’t visit the charity it funds, doesn’t interview staff members, doesn’t wait for approvals from boards of directors. Members make decisions on the spot.
Despite its big donations, it is decidedly low tech. Only checks are accepted, because they can be forwarded with no fuss to the ­charity. Leaders pass a hat to pay for the meeting room rental. A glass fish bowl holds the charity choices.

Such informal giving is a growing trend in women’s philanthropy, said Debra Mesch, director of the Women’s Philanthropy Institute at Indiana University. Many women prefer unstructured ways to donate, she said. And they like a networking or social component to their giving.

“Women like to do their philanthropy collectively and collaboratively,” said Mesch. “Grass-roots groups like this are happening all across the country.”

The Women’s Foundation of Minnesota has an affiliated “giving circle” — a group that pools its money for a cause — called Women of ­Influence, with about 30 to 40 members who each donate $1,000 a year, said Roper-Batker. They donated $29,300 last year for programs helping women and girls.

The Power of 100 also focuses on family and children’s causes.

“It’s a great way for people to get educated about community issues,” said Roper-Batker. “It’s also a great leadership opportunity. They [the women] have to research an organization, make a presentation and learn about critical issues facing their ­community.”

On a recent Monday night, a stream of women headed to the meeting room at the New Brighton Community Center. They signed in, grabbed a ballot and headed to the fish bowl on the table. Each jotted down the name of her favorite charity and stuffed it into the bowl.

After everyone took their seats, Power of 100 leaders passed the glass bowl through the audience, and three people stuck their hands in and pulled out the finalists. The folks who nominated the charities gave five-minute presentations. Then the women marked their ballots.

Meanwhile, Carol Arthur, executive director of the Domestic Abuse Project, which received $10,000 last quarter, moved to the front of the room to thank them for their gift.

Arthur later said: “The money is, of course, of great benefit. … But it’s also such a powerful message to the families … to know that a group of 100 women came together and made a public statement that they want to help them.”

Finally, the night’s winner was announced: Spare Key, a Minnesota-based nonprofit that ­provides a housing payment to families with a child suffering from a ­life-threatening illness.

As if on cue, the women opened their purses and pulled out their checkbooks.

Susan Johnson of Minneapolis was among those grabbing a pen. A marketing manager for a national corporation, she travels frequently. She thinks The Power of 100 is a terrific organization for busy women who care about their communities.

“It’s exposed me to organizations I would never have known about,” said Johnson. “And it’s really nice to be able to meet the executive directors of the organizations [funded] instead of getting a slick marketing brochure in the mail.”

The idea of “giving circles” is not new. They range from small groups meeting in living rooms to more structured programs affiliated with foundations.

What’s unusual about the Power of 100 is that it is a grass-roots group, created solely by word-of-mouth, that has managed to give away nearly $40,000 its first year.

A recent study by Indiana’s Women’s Philanthropy Institute indicated that women baby boomers and older women — the demographics of the group writing out checks on this day — donate a greater portion of their incomes than men of the same age.

The founders of the Power of 100 hope that generosity continues. They envision an east metro and a west metro chapter down the road.

“I think people have a desire to do something, but writing out a check for $100 doesn’t have the impact that $10,000 does,” said Kuehn. “And a lot of these women are looking for an opportunity to get together with like-minded women. They want to accomplish more.” 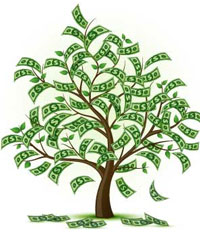